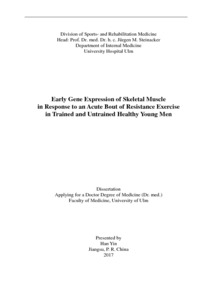 Although there is an increasing understanding about gene-specific transcriptional activation during acute or chronic resistance exercise (RE) induced adaptation, very few studies have used whole genome microarrays to clarify the underlying mechanism of molecular and cellular processes, which are involved in muscle adaptation after an acute bout of RE in healthy young men. Therefore microarray analysis as a high-throughput gene-screening tool was used to identify pathways and genes for quantitative real time polymerase chain reaction, which furthermore provide a comprehensive understanding of the early gene expression (0~180 min post-exercise) in RE trained and untrained healthy young men following an acute bout of RE. This data demonstrated that the most genes induced by acute RE were observed in both trained and untrained muscle, moreover, RE trained muscle produced a higher number of differentially expressed genes and up-regulated the magnitude of gene expression changes to a greater extent than untrained muscle. Furthermore, this significantly enhanced mRNA expression of genes was found to be mainly involved in metabolism, vascular development, cell survival, muscle growth and development. Based on this study, we also found that RE training could selectively attenuate the mRNA expression of some genes associated with myogenesis and metabolism following acute RE. More interestingly, an increase in mRNA expression of NR4A1 was observed to be correlated with a decrease in myostatin (MSTN) expression, especially in trained muscle, which combined with their counter effect on muscle remodeling and metabolism indicates that the interaction between NR4A1 and MSTN may be an important part of muscle development and homeostasis. Furthermore, in a C2C12 study, an acute and chronic exercise model with high-frequency electric pulse stimulation (EPS) induced C2C12 myotubes for studying exercise-inducible responses in human skeletal muscle was employed. The data demonstrated this cell model could simulate some exercise-induced gene expression changes in RE trained and untrained muscle in vivo, at least for some selected genes suggesting that a high-frequency EPS induced myotube model could at least partly mimic the effects of acute and chronic RE on human muscle growth and hypertrophy. This in vitro cell model may have the potential to be a useful tool to explore the complex molecular mechanism underlying the muscles’ responses to acute and chronic exercise.