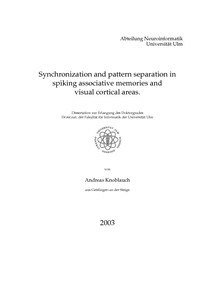 Neural associative memories provide efficient methods for information retrieval which can be superior to classical algorithms such as look-up-tables or hashing. The first part of this work extends the classical theory of binary associative networks. It is shown that matrix compression enables the full exploitation of the physical memory, while previously the storage capacity was assumed to be about 70 percent. Further analysis showed that using spiking neurons can improve drastically the fault tolerance against false one-entries and enable fast separation of superimposed patterns. The classical analysis relies on a binomial approximation of the neuron potential distribution. This is shown to underestimate massively the variance leading to overestimation of storage capacity and fault tolerance. A better approximation reveals that the variance grows with the square of the address pattern activity, not just linearly. The second part of this work contributes to brain theory. Neural associative memory can be interpreted as an abstract model for cortical networks, where the stored patterns correspond to assemblies of strongly coupled neurons. From the spike counter model, a biological version was derived showing a similar performance as the technical model. In order to investigate the binding problem, two reciprocally connected cortical areas were implemented. The lower area was modeled similar to the primary visual cortex, the higher area as a spiking associative memory. When presenting several superimposed shapes, scene segmentation happens on a time scale of hundreds of milliseconds. This is one order of magnitude slower than in earlier proposed models. However, the model is consistent with various neurophysiological observations such as synchronization on different time scales, fast oscillations, ongoing neural activity, and attentional or biased competition. Moreover, the model suggests new solutions to some of the harder binding problems such as role assignment.