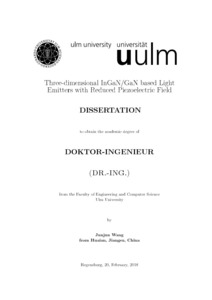 Due to the polar character of III-nitrides, the efficiency of InGaN/GaN-based light emitting diodes (LEDs) decreases with an increasing emission wavelength and gets quite low at the wavelength of green light. Therefore, three-dimensional (3D) GaN is realized via selective area epitaxy offering tilted semipolar facets to complete a LED structure. Proper thickness of spacer (the intentionally undoped GaN layer lying directly on top of the active region) as well as good conductivity of main p-GaN layer and p-conduct layer are essential to obtain efficient LEDs. Therefore, the spacer thickness is optimized to achieve good balance between hole transport into QWs and QW efficiency. Mg doping in p-doped layers is revealed by imaging secondary ion mass spectroscopy for our 3D LED structure. Injection efficiencies of electrons and holes differ strongly from the n- and the p-side of the diode. The droop effect gets severe since most of the charge carriers accumulate in the quantum well (QW) closest to the p-GaN causing high carrier density there. This issue can be circumvented by optical excitation of carriers leading to the idea of luminescence conversion structures with green light emitting InGaN QWs optically pumped with a highly efficient blue LED which is discussed in Chapter 5. In this work, we investigate luminescence conversion structures with semipolar InGaN/GaN QWs based on our 3D inverse pyramidal structure. The facet formation of the GaN inverse pyramids, {10-11}, {11-22} or coexistence of both facets, and its effect on the QW quality is discussed. These structures have been mainly characterized by an optical transmission experiment, which enables the determination of the conversion ratio. Moreover, degraded InGaN material quality with high indium content plays also an important role for the low QW efficiency. We enhanced the green emission of the conversion structure under optical excitation focusing mainly on the optimization of the InGaN growth conditions. Despite of systematic investigations of our semipolar LEDs, the electroluminescence (EL) output power of the semipolar LED is still inferior as compared to the c-plane ones. Two LED evaluation methods, fitting of the EL data according to the well-known ABC model and electron beam induced current (EBIC) are introduced in Chapter 6 to find out reasons. By analyzing the EL data, one acquires more information beyond the EL output power, such as the internal quantum efficiency and the carrier injection efficiency. Therefore, optical performance of the QWs and charge carrier transport into the QWs can be evaluated separately. The analysis of EBIC applied in a SEM is a powerful LED analysis tool, capable to reveal the position and the material quality of the buried pn-junction as well as the minority carrier properties. Two important aspects of the LED structure, the pn-junction quality and the QW quality, are collected enabling a good understanding which issue is essential to improve the LED performance.