Effect of normobaric hyperoxia on leukemic cell lines in vitro 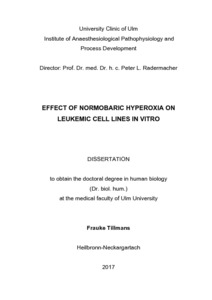 Aims and Objectives: The objective of this study was to evaluate the molecular mechanisms following normobaric hyperoxia on acute lymphoblastic leukemic cell lines in vitro through assessment of oxidative stress, DNA-fragmentation, mitochondrial function and apoptosis induction. The study was aiming for a more detailed understanding of the basic molecular alterations in leukemic cells induced by reactive oxygen species. Methods: Acute lymphoblastic leukemic cell lines Jurkat and CCRF-SB were cultured according to standard operating procedures and exposed to a single bout of 65% oxygen for 2 or 18 hours respectively. The oxygen exposure protocol included a control sample before exposure, measurements immediately after exposure and after recovery intervals of 6 hours and 24 hours in normoxic conditions. DNA-fragmentation was assessed using single cell gel electrophoresis (comet assay), protein expression of oxidative stress markers, induction of nitric oxide Synthases and expression of pro- and anti-apoptotic proteins were assessed using western blot, electrophoretic mobility shift assay, or enzyme-linked immunosorbent assay. High-resolution respirometry was applied for measurement of mitochondrial respiratory capacity and complex activity within the electron transfer system. Results: The level of oxidative stress in both cell lines was increased after normobaric hyperoxia, the B-cell with a an immediate response after exposure but fast recovery and the T-cell with a delayed response up to 24 hours after the stimulus. Mitochondrial impairment of the intact cells could not be found, however, changes in the activities of complexes I and II were discovered after hyperoxia compared to normoxic conditions. Apoptosis induction and regulation of nitric oxide synthase expression was solely found in the T-cell. Discussion: Oxidative stress was induced with 65% oxygen in both cell lines and with both exposure schemes. However, molecular and metabolic reactions to reactive oxygen species in B- and T-cells varied greatly. While the B-cell was affected immediately but recovered within 24 hours and only showed a transient activation of apoptotic pathways, the T-cell responded later with DNA-fragmentation, apoptosis induction after long-term exposure, and regulation of nitric oxide synthase expression. Conclusion: Looking at the very different effects of normobaric oxygen on molecular and metabolic alterations in the two cell lines examined, it does seem inadequate to propose a general oxygen exposure scheme for acute lymphocytic leukemia. Sensitisation of each cell line will have to be considered individually. Additional research is needed to separately identify suitable intervals for each cell line before ex vivo or animal experiments can be initiated.