Probe influence on integrated antenna measurements at frequencies above 100 GHz 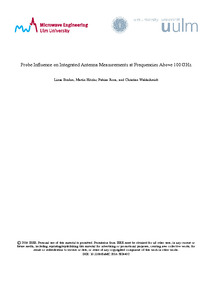 When measuring integrated antennas the signal has to be fed to the antennas with wafer probes. Wafer probes are commonly used to contact integrated circuits for on-chip measurements. As integrated radar and communication chips with radiating elements are a fairly recent development, the wafer probes were not optimized for size and reflective properties (characteristics which are important for antenna measurements), but rather for their return loss, insertion loss, and mechanical stability. This resulted in metal probes that are relatively large compared to the wavelength. In this paper, two probes are compared with regard to their performance in integrated antenna measurements. The first probe is a standard commercially available probe. The second one is a modified probe with an extended coaxial probe tip to increase the distance between probe and antenna, which decreases the distortion and reflection caused by the probe significantly.