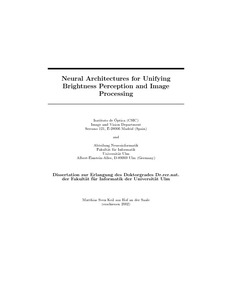 The present work proposes a new architecture for brightness perception, which aims to unify image processing with brightness perception. A successful unification has not been achieved so far, since models which predict brightness phenomena only rarely produce meaningful results when processing real-world images. Likewise, models for image processing tasks (typically coding or denoising), which often claim to provide some account to early vision, fail to predict brightness perception data. None of those models has yet achieved a segregation of the visual input in a way compatible with object recognition, since they usually create only an internal (i.e. cortical) representation of the visual input. Furthermore, no two-dimensional model has come up yet with a neurophysiologically plausible solution to the anchoring problem. With the present thesis, a novel architecture for foveal brightness perception is presented, which is in agreement with neurophysiological and psychophysical data. Within the architecture it is presumed that cortical simple cells of different symmetries (even, odd), and sizes, extract different aspects from the visual input, namely EXTURE (small-scale even symmetric features, e.g. lines and points), SURFACES (small-scale odd symmetric features for building cortical surface representations), and LUMINANCE GRADIENTS (large-scale even and odd symmetric features, e.g. defocussed edges). Simulations show how in this way surface representations are rendered invariant against illumination conditions and noise, while at the same time this information is preserved in gradient representations and texture representations, respectively. Surface representations are built by nonlinear diffusion, whereby a novel retinal code is used. This code simultaneously encodes contrast and luminance information, and is suggested as a neurophysiologically plausible solution to the anchoring problem.