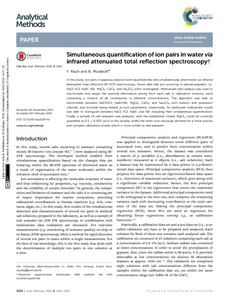 In this study, ion pairs in aqueous solution were quantitatively and simultaneously determined via infrared attenuated total reflection (IR-ATR) spectroscopy. Seven salts that are occurring in natural seawater, i.e., NaCl, KCl, NaBr, KBr, MgCl2, CaCl2, and Na2SO4 were investigated. Multivariate data analysis was used to discriminate and assign the spectral information arising from each salt in calibration mixtures, each containing a mixture of all constituents in different concentrations. The algorithm was able to discriminate between NaCl/KCl, NaBr/KBr, MgCl2, CaCl2, and Na2SO4 with sodium and potassium chloride, and bromide being treated as sum parameters, respectively. An additional multivariate model was able to distinguish between NaCl, KCl, NaBr, and KBr including their simultaneous quantification. Finally, a sample of real seawater was analyzed, with the established model. MgCl2 could be corretly quantified predicted at 0.5 ± 0.05 % (w/v) in this sample, whilst the other ions obviously demand for a more precise and complex calibration model, which is more similar to real seawater