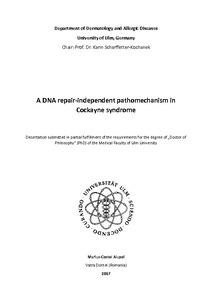 Cockayne syndrome is a rare genetic disorder characterized by childhood onset of degenerative symptoms reminiscent of the aging body. Loss of subcutaneous fat, alopecia, cataracts, neurological degeneration and cachexia are the hallmark symptoms of the disease. These are accompanied by developmental delay, resulting in a severe phenotype and a short lifespan (approx. 12 years). Mutations in five different genes are causal for CS (CSA, CSB, XPB, XPD or XPG), encoding for proteins involved in different stages of Nucleotide-Excision Repair mechanism, thus explaining the elevated UV-sensitivity of the patients. This study focused on a non-canonical function of CS proteins outside NER, namely rRNA transcription by RNA polymerase I. The data could clearly show that a disturbance in RNA polymerase I transcription in CSA and CSB patient-derived cell lines is followed by a decrease in translational accuracy of the ribosomes. This results in a high level of misfolded proteins as shown by BisANS labeling, due to sloppy translation of ribosomes. Moreover, CS cells display high levels of ROS, as shown by DHE and DCF-ROS sensitive dyes. As misfolded proteins are prone to oxidation, we demonstrated that ROS causes increased protein carbonylation in CS cells. Although UVsS cells have also elevated ROS levels, these cells do not show high protein carbonylation, strengthening the hypothesis that misfolded proteins in CS cells are highly prone to oxidation. As proteasomal activity is decreased in CS cells, this suggests that the misfolded proteins accumulate most probably in the ER. As a result, GRP78 and p-eIF2α are elevated in CS cells, indicating that ER stress and unfolded protein response (UPR) are activated in these cells. Increased phosphorylation of eIF2α reflects an activated PERK pathway, which determines further repression of RNA polymerase I transcription and of protein synthesis. Using the chemical chaperone TUDCA to decrease ER stress, we could clearly show a rescue of RNA polymerase I activity by higher levels of 47S rRNA transcription, and also an increase in global protein synthesis. This result underlines that activation of unfolded protein response plays a central role in RNA polymerase I transcriptional activity. Additionally, we were able to show that UPR is activated in cells from patients with the more severe XP/CS, with mutations in XPB, XPD and XPG, indicating that our findings could represent a general mechanism in CS. Mouse models of Cockayne syndrome with similar mutations as in patients display only a mild phenotype. However, neurodegeneration is common for these mice in the late stages of their life. Using Csbm/m mice with similar mutation in the Csb gene as in the CS1AN patient-derived cell line, we showed that, while translational accuracy and ER stress markers are not activated, the activity of RNA polymerase I is significantly decreased in the brain of these mice. This result suggests that a disturbed RNA polymerase I activity might contribute to neurodegeneration of Csbm/m mice. Taken together, the present work elucidates that protein oxidation plays a central role in the previously described oxidative hypersensitivity of CS cells. This hypersensitivity can be overcome by using chemical chaperones such as TUDCA, which decreases ER stress and restores the deficient RNA polymerase I transcription and protein synthesis of CS cells. The low toxicity of TUDCA and the high availability of other chaperones is an advantage for further in vivo studies, and might offer a good therapeutic option for Cockayne syndrome.