The interaction between the voltage-gated potassium channel hKv1.3 and verapamil 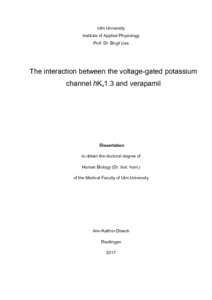 T- and B-lymphocytes usually express the human voltage-gated Kv1.3 channel (hKv1.3). Verapamil known as a potent L-type Ca2+channel blocker is also able to block hKv1.3 channels. The blocking effect of verapamil on currents through wild-type and six hKv1.3 mutant channels in the open and not in the inactivated state was determined using the whole-cell patch clamp technique. From the time course of the open channel block kon of verapamil was calculated. Comparing on-rates of different mutations helps to identify the interaction of different amino acid residues with verapamil reaching its blocking site. The on-rate of verapamil was not altered by a mutation to position 419. Mutations to position 417, 418, 346 and 346/418 had a moderate effect whereas a mutation to position 420 had a great effect and reduced kon ~ 6 fold. We conclude that position 420 in hKv1.3 channels strongly interacts with verapamil and is a presumed second binding site. Both positions 417 and 418 in hKv1.3 channels interfere with verapamil whereby mutation L418C only interferes with verapamil until verapamil has reached its blocking site. Position 419 does not interfere with verapamil at all. Mutant hKv1.3_L346C and hKv1.3_L346C_L418C mutant channels indirectly influenced verapamil’s ability to reach its binding site.