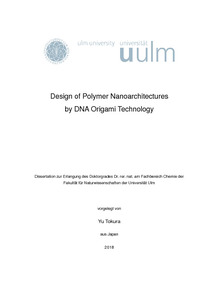 This dissertation explores a novel concept and new methodologies for the fabrication of precision (bio)synthetic polymer architectures in nanoscale resolution by merging DNA nanotechnology and polymer chemistry. Polymeric materials are versatile and play important roles in modern nanotechnologies including nano-optics / electronics, nanofluidics, nanosensors, nanomedicine, and so on. To further develop these applications in the future, the rational design of polymeric materials with a high structural precision in the low nanoscale dimensions is highly attractive. I have particularly focused on DNA nanotechnology, more precisely, represented as “DNA origami”, and utilized this technique as a template for synthesizing novel polymeric nanostructures. The high programmability of DNA origami was employed for the first time to design and create a suitable chemical reactor to control polymerization reactions in nanoscale environments with great structural precision. The integration of controlled radical polymerization (CRP) and DNA origami was established for the first time, which could create desired polymer nanopatterned surfaces in a controlled fashion. Through these investigations, unique features were found such as altered surface properties of DNA origami by grown polymers that inspired the next step. Further developments were achieved by making use of an established in-situ polymerization system for creating defined DNA / polymer hybrid nanomaterials. The step-wise design to convert the common two-dimensional rectangular DNA origami to a three-dimensional tube-shape structure with an outer polymer coating could potentially protect DNA origami from external stimuli (in particularly, against nuclease digestion), which is one of the current issues limiting various applications of DNA origami-based materials / systems. Additionally, the remaining interior space of the tube was available for further reactive environment, which was demonstrated by incorporation of multiple DNA-based enzyme moieties. In addition, polydopamine, a bio-inspired polymer whose polymerization is more challenging to control, was also successfully fabricated in a defined manner on DNA origami for the first time. Properly designing the catalytic domain on DNA origami could allow us to fabricate various shapes and sizes of polydopamine nanoarchitectures in high precision. The adhesive property of polydopamine was successfully expressed on DNA origami to dynamically control its conformation as a supramolecular glue. On the other hand, the rigidly crosslinked polymer structure of polydopamine allowed us to rapidly liberate the grown polydopamine with programmed geometry from DNA origami template by a facile acid treatment. To summarize, the integration of polymer chemistry and DNA nanotechnology was studied in the thesis, which emerged as a unique and promising approach to fabricate various polymeric nanoarchitectures in a defined manner. Versatility and uniqueness of the reported methods could cause a stir in the design concepts of polymeric nanomaterials and pave the way for the further development of nanotechnology in future.