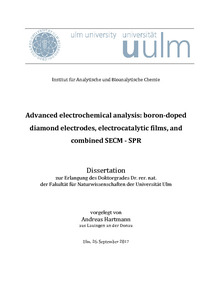 Today’s analytical demands are driven by complex questions arising from various fields ranging from analysis in life sciences to material sciences involving surface modifications at the nano- to micrometer scale. Based on fast response times, low cost, and simplicity in sample handling electroanalytical methods are widely applied. However, with increasing sample intricacy, especially for biological samples, a main issue in electroanalytics is to clearly distinguish signals of the analyte from other parasitic signals, and to preclude any electrode fouling that attenuates the analytical response. Hence, electrochemical transducers combining high sensitivity for a specific analyte and reducing of interfering effects are highly demanded. Boron-doped diamond (BDD), characterized by physical and chemical inertness may allow the detection of analytes, which are known for severe electrode fouling at conventional electrode materials, without signal loss. Thus, in the first part of this thesis, long-term detection of the broadband antibiotic gentamicin was investigated at macroscopic BDD electrodes. Species based on carbohydrate structures with amine substituents such as gentamicin cause severe electrode fouling, when detected at gold electrodes, which are frequently used in electrochemical detectors in separation techniques. These long-term investigations revealed a significant reduced electrode passivation for the applied BDD electrodes in comparison to gold electrodes. Instead of using an inert electrode material, electrode fouling can also be reduced by electrode surface modification approaches. Modification of the electrode surface with an electrocatalyst, not only gains high selectivity, but may additionally reduce the detection potential of an analyte, which diminishes electrode fouling and parasitic currents deriving from other sample components. Prussian Blue (PB), as one of the most extensively studied electrocatalysts, is frequently applied for electrochemical detection of hydrogen peroxide. H2O2 is not only the by-product of enzymatic conversions but also plays a significant role in cell metabolism and apoptosis. Hence, it is important to develop reliable detection schemes for physiologically relevant H2O2 concentration in complex matrices at potentials, which avoid co-oxidation of interfering species. Scanning electrochemical microscopy (SECM) is highly suitable to study the release of signaling molecules or to obtain spatially resolved information on live cells. Consequently, PB-modified ultramicroelectrodes (UMEs) applied in SECM experiments allow the determination of 2 H2O2 in small compartments at potentials around 0 V, which prevents co-oxidation of interfering compounds and therefore eliminates parasitic currents. The stability of PB sensing layers, especially deposited on UMEs is limited in neutral aqueous media containing high concentrations of H2O2, which renders long-term measurements difficult. Hence, in a second part of this thesis, two different strategies for the stabilization of PB sensing layers on UMEs were investigated. Both, an improvement of the sensing layer adhesion by depositing a Pt/C composite interlayer, and the application of a mixed layered system of iron- and nickel hexacyanoferrates, showed enhanced layer stability in SECM experiments. Additionally, it is also demonstrated within this thesis that SECM is a highly suitable tool for surface modification at the micro meter range. Compared to commonly used microstructuring methods like photolithography, SECM microstructuring benefits from in situ surface modification with subsequent analysis. However, since for microstructuring a potential is applied to the SECM tip, SECM provides no possibility to in situ monitor the progress of a microstructuring event. Therefore, in the third part of this thesis, SECM was combined with wavelength-modulated surface plasmon resonance (SPR). Two different approaches for microstructuring at a gold surface based on electropolymerization of diazonium salt were investigated with the combined SECM-SPR setup. Besides, the in-situ characterization of the modified surface using SECM approach curves and SECM imaging, in situ monitoring of the structuring progress was performed. A direct correlation between the amount of the deposited polymer and the SPR signal shift, as well as layer thickness investigations could be achieved, clearly demonstrating the applicability of the combined SECM-SPR system for microstructuring.