The role of glia during striatal ontogenesis: convergence of the major developmental signals on astrocytes 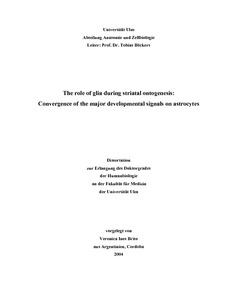 The development of the striatum is a complex process that depends on the precise temporal and spatial action of developmental signals. In particular, dopamine represents a major developmental signal for the striatum. Their effects can be mediated directly on GABAergic cells or indirectly, either via another cell population or via other developmental factors. There is growing evidence that interactions between different developmental signals rather than singular actions are critical for cellular differentiation and organization of the striatum. Since previous works have shown that dopaminergic effects exhibit significant latencies, it is hypothesized here that additional factors and/or another cell population are required to serve an intermediate role. The first part of this study is concerned with the expression of D1-like receptors in striatal cells. The second part focuses on the intermediate role of BDNF in dopaminergic effects via modulation of the dopaminergic transmission at the postsynaptic level in striatal cells. The third part of this study is concerned with modulation of the glutamatergic transmission by dopamine in non-neuronal cells. In conclusion, our findings clearly suggest a potent intermediate role of astrocytes in developmental processes induced by dopamine. First, astrocytes express the D1-like receptor subtype (D5-R). Second, BDNF increases the expression of D5-R thereby possibly increasing the sensitivity of astrocytes toward dopamine. Third, dopamine is able to regulate the glutamatergic transmission by modulation of the glutamate transporters expression. Taken in consideration the importance of dopamine for striatal ontogenesis, we propose a new model of dopaminergic action where signals like dopamine and BDNF converge on astrocytes coordinating the availability of other developmental signals and establishing a network of interaction with neurons in a spatial and temporal correct fashion.