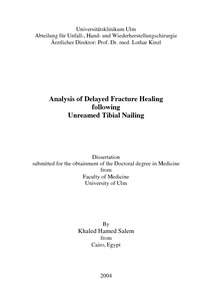 In order to determine the factors that affect tibial fracture union after unreamed nailing and the variables that have a negative impact on the healing process or the complication rate, 158 patients with 160 tibial shaft fractures treated using the AO Unreamed Tibial Nail (UTN®) were retrospectively reviewed. There were 105 men and 53 women with a mean age of 39,5 years. Fractures were classified using the AO classification into 78 type A fractures, 65 type B fractures, and 17 type C fractures. Fracture comminution was classified using Winquist criteria. There were 115 closed and 45 open fractures. Nearly two-thirds of the fractures were caused by high-energy trauma. Fracture union occurred after a mean time of 24,3 weeks. There were 20 cases of delayed union and 16 non-unions, all united by the end of treatment. There were remarkably few soft tissue complications with a very low deep infection rate. Fatigue failure of the locking screws continues to be a major complication. The most important variables affecting fracture healing in this study were the mechanism of trauma, fracture site gap, and the time to dynamization. With a 10 % significance level, the variables associated with a higher risk of delayed or non-union were the degree of comminution, fracture site gap, and most importantly, the time to dynamization. Fracture comminution and high energy trauma were the main factors associated with a higher risk for malunion. The odds were 5 times more with high comminution and 13 times more with high-energy falls than with low comminution and low-energy falls respectively. The risk of fatigue failure of the locking screws was highest for 3,9 mm screws used in 9 mm nails. Although not statistically significant because of the small sample size, proximal tibial fractures showed a general tendency for a less than favorable outcome with unreamed nailing.