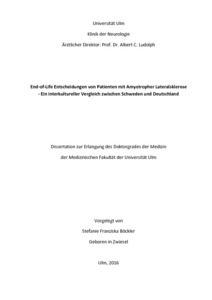 The subject of this thesis is the psychosocial adaptation of Swedish patients with amyotrophic lateral sclerosis (ALS) to their disease as well as their decisions regarding life-prolonging and -shortening measures in an intercultural comparison with German ALS patients. For this purpose, data of N=40 Swedish ALS patients were collected using standardised neuropsychological questionnaires and a semi-structured interview. Data were compared with N=100 German ALS patients. It was shown that the psychosocial adaptation was not associated with physical state of functioning, but it was positively related to the duration of the illness. In an intercultural comparison, the Swedish ALS patients showed a significantly higher quality of life and lower depression rate than the German ALS patients. Although this study confirmed a link between the desire for accelerated death and low psychosocial adaptation, there was no difference between the Swedish and German ALS patients in their desire to hastened death. Non-invasive ventilation was found to be unrelated to psychosocial adaptation, while a positive correlation between percutaneous endoscopic gastrostomy (PEG) nutrition and quality of life was demonstrated. There was no difference between the two groups in their choice for life-prolonging measures, but a high number of ALS patients had not yet decided on life-prolonging measures. Especially for measures that are considered invasive, a decision was postponed. Finally, it was shown that the social network of ALS patients is an important factor in the decision-making process and in the management of the disease. The results of this thesis lead to the conclusion that psychosocial adaptation is possible in a severe and fatal disorder such as ALS. There seem to be cultural differences between German und Swedish ALS patients regarding psychosocial adaptation and their therapeutic decisions, partly explained by differences in social support. Concluding, there is a need to focus more on the social network of patients in research and practice as well as to look for ways to improve and support it.