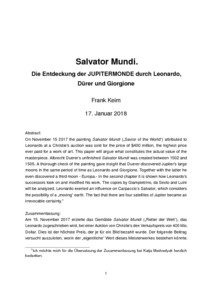 On November 15 2017 the painting Salvator Mundi („Savior of the World“) attributed to Leonardo at a Christie’s auction was sold for the price of $400 million, the highest price ever paid for a work of art. This paper will argue what constitutes the actual value of the masterpiece. Albrecht Duerer’s unfinished Salvator Mundi was created between 1502 and 1505. A thorough check of the painting gave insight that Duerer discovered Jupiter’s large moons in the same period of time as Leonardo and Giorgione. Together with the latter he even discovered a third moon - Europa.- In the second chapter it is shown how Leonardo’s successors took on and modified his work. The copies by Giampietrino, da Sesto and Luini will be analyzed. Leonardo exerted an influence on Carpaccio’s Salvator, which considers the possibility of a „moving“ earth. The fact that there are four satellites of Jupiter became an irrevocable certainty.