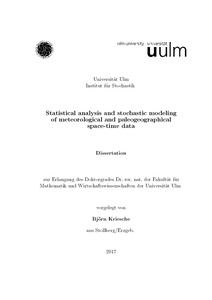 In the present thesis, we develop novel stochastic models, statistical methods, and simulation algorithms for meteorological and paleogeographical space-time data. In this context, we aim to address two practical problems from different scientific disciplines. On the one hand, we consider an open question from meteorology, which has a high relevance in operational weather prediction. Currently applied probabilistic forecast methods are designed to estimate probabilities for the occurrence of weather events at fixed geographical locations, which is why they are called point probabilities in literature. However, for the issuing of weather warnings it often is desired to provide probabilities for the occurrence of certain weather events (e.g., heavy precipitation, thunderstorms) somewhere within an area, which are denoted as area probabilities. As no generally applicable formulas for the derivation of area probabilities based on point probabilities are available, we propose several spatial stochastic models that can be used for the operational computation of area probabilities in a general context. The second problem considered in this thesis concerns the statistical reconstruction of paleodemographic and paleoecological trends during the Holocene. In recent years, extensive databases of archaeological and paleoenvironmental samples have been compiled but only few attempts to estimate spatio-temporal distributions of, e.g., populations or vegetations on a continental scale were made. Therefore, another goal of this thesis is the development of suitable nonparametric methods to compute series of maps showing population densities and vegetation abundances for different plant taxa in North America over the past 13000 years. Furthermore, we also discuss an statistical analysis of relationships between estimated demographic and environmental developments. The present thesis consists of three parts. In Part I, we provide some important preliminaries to motivate the contents of this thesis and to allow for a better understanding of the considered data and the applied mathematical models and methods. The introduction in Chapter 1 briefly describes the general context of the practical problems which we attempt to address using the statistical methodology proposed in Parts II and III. To further increase the comprehensibility of the stochastic models and statistical methods developed in Part II for the representation of several weather events, Chapter 2 provides an overview of systems, methods, and products applied in operation weather prediction. Additionally, this chapter gives a review on previous approaches to the computation of area probabilities and on existing stochastic models for precipitation cells and precipitation amounts. Chapter 3 contains a detailed description of the mathematical basics which are needed throughout this thesis. In particular, this includes an introduction of random fields with a focus on the characterization and estimation of dependency structures, a discussion of models from stochastic geometry, their properties, and simulation algorithms, and a review of nonparametric smoothing methods used in kernel density estimation and kernel regression. Part II of this thesis describes the development of stochastic models for the representation of different weather events. In Chapter 4, we suggest to model precipitation cells using circular discs with random centers and a joint random radius. Furthermore, we propose suitable statistical methods to compute important model characteristics based on available point probabilities. This approach is extended in Chapter 5 by assigning a randomly scaled response function to each precipitation cell such that the summed response functions can be considered as a representation of precipitation amounts. Again, methods are developed to algorithmically compute model characteristics based on available point forecasts. A further generalization of the model for precipitation cells is described in Chapter 6, where a representation of thunderstorm cells based on cluster processes is provided. Besides forecasted point probabilities, this more complex model also requires thunderstorm records from past periods for model fitting but in return produces much more realistic realizations of thunderstorm events than previous approaches. All three models introduced in Part II can be used for the operational derivation of area probabilities in a general context. To evaluate forecast quality, obtained area probabilities are compared to high-resolution weather observations. Finally, in Part III we discuss a spatio-temporal analysis of prehistoric population densities and vegetation abundances in North America. At first, Chapters 7 and 8 describe similar nonparametric approaches to the statistical estimation of population and vegetation intensities over the past 13000 years based on extensive databases of radiocarbon dates and fossil pollen samples. The proposed methodology produces spatially and temporally smoothed intensity maps every 100 years while accounting for several potential biases such as inhomogeneous sampling strategies, taphonomic loss, and boundary effects. We provide a brief discussion of obtained population intensity maps for most regions of North America and assess their significance by performing a sensitivity and robustness analysis. Vegetation intensity maps are estimated for a series of 10 plant taxa occurring in North America and an interpretation of results for one example taxon is given. In Chapter 9, we analyze statistical relationships between obtained population and vegetation intensities (as well as 500-year changes in both variables) by estimating spatio-temporal cross-correlation functions. A nonparametric method to assess the significance of correlation results is proposed and results for one example taxon are interpreted in the context of scientific literature. The thesis is concluded by a summary of results and an outlook on open questions in Chapter 10 to motivate topics for future research.