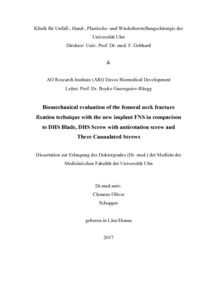 The rate of femoral neck fractures, a common injury in the elderly, increases constantly (Cooper et al. 1992; Cummings et al. 1990; Johnell & Kanis 2004). Therefore, two ways of addressing have been established, consisting of the use of the 3CS (3 Cannulated Screws) on the one and the DHS (Dynamic Hip Screw) systems (blade and screw) on the other hand. (Gjertsen et al. 2010; Gurusamy et al.2005; Husby et al. 1989; Ly & Swiontkowski 2008). The most challenging aspects in managing femoral neck fractures result from achieving satisfying reduction on the one and facing poor bone quality in osteoporotic bone on the other hand (Chua et al. 1998; Duckworth et al. 2011; Husby et al. 1989; Rehnberg & Olerud 1989; Smith et al. 1992; Swiontkowski 1994; Thein et al. 2014). While the old styled 3CS technique works as a minimally invasive procedure, the use of the DHS systems affords open surgery. The role of an ideal minimal invasive implant would assure the required stability of fixation providing compression force to the fracture site and preventing rotation of the femoral head as well, found in both, the 3CS and the DHS systems. Furthermore, such a system would introduce the opportunity of working minimally invasive found in the 3CS method. Whereas the DHS Blade has been established as a European gold standard for the treatment of femoral neck fractures concerning cases of osteoporotic bones in special, the conventional DHS Screw with antirotation screw continues to be an international gold standard for the purpose of comparison (Bhandari et al. 2009; Müller et al. 1991, Russell & Crenshaw 1992). The conventional fixation with the 3CS can be used for treatment of femoral neck fractures type AO (Arbeitsgemeinschaft Osteosynthesefragen) 31-B (Ruedi & Murphy 2001). The new minimal invasive implant FNS (Femoral Neck System) was developed for the treatment of the mentioned types of femoral neck fractures and was thought to become a replacement for the aged 3CS. The aim of this project was to evaluate the biomechanical performance of the newly designed FNS under cyclic loading in comparison to the existing clinical implant solutions on the market, DHS Blade, DHS Screw and the 3CS. There for, an elderly human cadaveric model was set up. In its course a 70°Pauwels III/AO 31–B2.3 fracture was performed in 21 human cadaveric frozen femora after augmentation through one of the 4 mentioned implants. Additional 30° distal and 15° posterior wedges were applied to the fracture, to create the worst case scenario as far as terms of stability are concerned.