Isolation and characterisation of amyloid aggregates from disease tissues 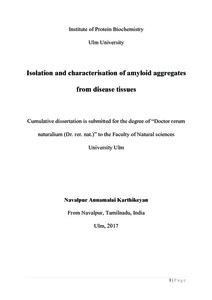 Amyloid formation is the central event in diseases such as Alzheimer’s (AD), Parkinson’s (PD) and several other systemic amyloidotic diseases like light chain amyloidosis (AL amyloidosis). In systemic amyloidosis, the multi organ involvement and post-translation modifications adds more complexity in delineating the disease mechanism especially in the case of AL amyloidosis. The exact disease mechanism underlying AL amyloidosis in vivo is not completely understood. Systemic AL amyloidosis is very aggressive particularly when the cardiac system of the patient gets affected. AL protein sequence involved in the amyloid deposits is found to be varying among patients and is therefore difficult to rationalize a common amyloid motif for the cause of the debilitating disease. Hence, AL amyloidosis is considered as a highly heterogeneous disease which also raises a question if such heterogenic properties affect the fibrillar structure or not. So far, the structure of tissue derived AL fibril structure is not well characterized due to the difficulties in isolating the intact fibrils. The infiltration of amyloid fibrils into organs is believed to be the primary cause for systemic amyloidotic diseases. However, increasing evidence in neurodegenerative diseases like in AD suggests that apart from fibril deposition, the soluble amyloid species play an important role in causing the debilitating disease. It appears that, the presence of either fibril and or soluble amyloid species are toxic to the living cells. However, exact the mechanism underlying the toxicity induced by amyloid aggregates is unknown and it is due to the lack of knowledge of structural and molecular properties of tissue derived amyloid aggregates. In vivo formed amyloid aggregates are yet to be characterized which may lead to fundamental insights of protein misfolding disease. Here, isolation and characterization of amyloid aggregates from diseased tissue material is presented.