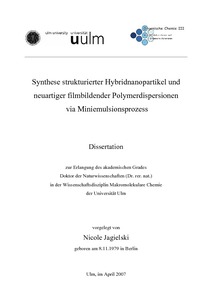 In the first subpart, a method was developed to produce stable dispersions through polyaddition reaction. Two systems were prepared: System A, comprising of polyaddition between Polyol PPG 2000 and diisocyanates and System B, comprising of addition of a fluorocompound (FFB) to increase the hydrophobicity of PUR-films. The influence of the kind of diisocyanate, the NCO/OH-ratio and the variation of the film properties by addition of a chain extender were studied. The second subpart deals with the synthesis of inorganic hybrid materials. The preparation of onion-like structured particles using inorganic hydrophobic lanthanide complexes such as Gd(III)(tmhd) in combination with different monomers were studied. By the variation of different parameters - molar ratio between monomer and complex, type and concentration of the surfactant and monomer, ligand and lanthanide ion - structured particles of size range from 50 to 200 nm could be obtained. Extending the previous work the heterophase polymerization of laurylmethyl acrylate (LMA) with the addition of gadolinium tris(2,2,6,6-tetramethyl-3,5-heptanedionate), Gd(tmhd)3 complex was extensively studied. The third subpart deals with the encapsulation of hydrophilic gadolinium complexes, like Magnevist® and Gadovist®, which are normally used as contrast agents in medical diagnosis, with polymeric shell coverage. The influence of encapsulation of complexes on the relaxivity was studied.