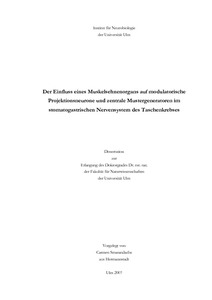 For an appropriate interaction with the environment, animals process sensory information with their nervous system. One well suited model systems for the investigation of neural processing is the stomatogastric nervous system (STNS) of the crab, Cancer pagurus. It is attached to the crab foregut and controls the movement of food throughout the foregut. It generates the pyloric rhythm, which is responsible for the filtering of food, and the gastric mill rhythm (GMR), which controls the movement of three internal teeth. These rhythms are modulated by the activity of descending projection neurons (Norris et al., 1994; Blitz et al., 1999; Nusbaum et al., 1992; Norris et al., 1996) and they are influenced by sensory feedback (Beenhakker et al., 2004; Combes et al., 1995; Katz & Harris-Warrick, 1991). In this work I characterized the influence of the sensory cell AGR (anterior gastric receptor) on the pyloric and gastric mill rhythms. AGR has a bipolar cell body and is located in the stomatogastric ganglion. It could be activated during an increase of tension of the gastric muscle gm1. AGR possessed at least two spike initiation zones. It was spontaneous active with low firing frequencies and displayed different active membrane properties. When AGR was activated with current injections, it diminished the activity of two pyloric neurons and prolonged the pyloric cycle period. It also effected the gastric mill rhythm by exciting the protractor motor neurons and inhibiting the retractor motor neuron. When a gastric mill rhythm was active, rhythmic AGR stimulation entrained this rhythm to faster or slower periods (up to 60 %). In addition, a single AGR stimulus could reset the gastric mill rhythm at any time of the gastric phase. The actions of AGR on both rhythms were elicited via a change in projection neuron activity. I characterized the interactions between AGR and four identified projection neurons. In addition, I activated AGR in closed loop conditions such that motor neurons and AGR could interact. These experiments demonstrated the importance of an appropriate timing of sensory feedback. Thus, for a general understanding of sensorimotor interaction, the processing of sensory information in higher neural centers is of critical importance.