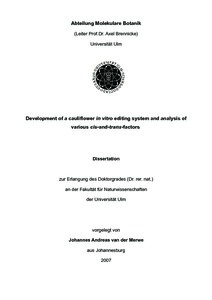 The mechanism(s) behind RNA editing in higher plants is not yet understood. To gain further insight, the work reported in this thesis has improved the current mitochondrial in vitro RNA editing system (in mitochondria) and adapted it to another, convenient plant species, cauliflower. This will allow the identification of trans-factors, as cauliflower is closely related to the model plant Arabidopsis thaliana. Furthermore, the cis-requirements for the second editing site in the atp9 mRNA construct were analysed and interesting differences were observed between cauliflower and pea. This site is only edited in the cauliflower RNA, since the sequence 70 nucleotides upstream in the pea RNA suppresses this activity. The cauliflower sequence seems to contain an "enhancer" sequence in this region for this editing site. Since elucidating trans-factors responsible for RNA editing in plant mitochondria was one of the main aims of this study, the effect of several potential trans-acting factors was tested in the in vitro editing system. Another set of experiments investigated if a transaminase is involved in RNA editing. In vitro editing assays in chloroplasts as well as in mitochondria require the addition of NTPs or dNTPs. This study showed, however, that the NTP/dNTP requirement can be replaced by NADH and NADPH, both substrates of the glutamate dehydrogenase (GDH) enzyme. A specific inhibitor of GDH, phosphinothricin, has an analogous effect, suggesting that the GDH has an inhibitory effect on RNA editing in vitro. This implies that RNA editing in plant mitochondria does not require the addition of an external energy source in the form of NTPs/dNTPs. As genetic approach to identify trans-factors, I screened 97 different editing sites in three ecotypes of Arabidopsis, for differences in RNA. An ecotype specific variance was found in the first editing site of the atp4 construct, which is fully edited in both C24 and Columbia ecotypes, but only partially (50 %) in Landsberg erecta.