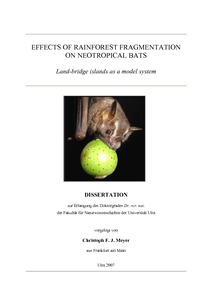 The correlated processes of habitat loss and fragmentation are considered the most serious threats to biodiversity and the primary cause for the current extinction crisis. The overall objective of this study was to investigate the impact of rainforest fragmentation on Neotropical bats, working within a system of high fragment-matrix contrast, a suite of small land-bridge islands in Gatún Lake, Panama. Overall, this study provides several lines of evidence that Neotropical bats are strongly affected by small-scale habitat fragmentation, at the community-, population-, individual species-, and genetic level. Differences with respect to species richness and composition between assemblages in unfragmented mainland forest and on Gatún Lake islands were strongly determined by island isolation rather than area or habitat structure at the patch scale whereas area effects were prominent at larger spatial scales encompassing several islands. In agreement with these findings, nestedness- and co-occurrence analyses hinted at isolation-dependent, differential colonization linked to species-specific differences in mobility as the main factor governing species composition on islands. In this context, this study highlights the importance of considering both structural and functional connectivity in determining species’ responses to fragmentation. Although the results at the community-level were inconclusive, I was able to demonstrate that certain bat species and foraging guilds exhibited high edge-sensitivity. My results further stress that bats respond mainly to habitat loss rather than the changes in landscape configuration associated with fragmentation suggesting that conservation actions should focus on habitat preservation. The fact that even species which did not show negative demographic responses already revealed loss of genetic variation as a consequence of fragmentation underlines the need for jointly considering demographic and genetic data in fragmentation studies.