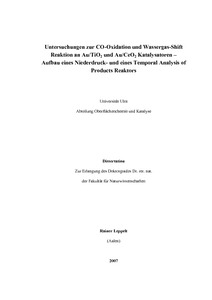 The reaction order for the WGS reaction over Au/CeO2 was determined. The influence of the Au content was studied on eight catalysts with increasing gold loading. The apparent activation energy for all catalysts was determined to be 40 ± 3 kJ/mol. In DRIFTS measurements formates and carbonates were identified as main surface species. The decomposition rate of formates is the same as the reaction rate and therefore the decomposition of formates is regarded as rate limiting step. By TPD-experiments the amount of surface formates was determined. Most adsorbed species could be removed from the catalyst by the dissociation with water to reactivate the catalyst. Isotopic labelled C18O showed a quick exchange of lattice oxygen and reaction with the labelled gas showed also that water exchanges oxygen. The adsorption of CO occurs on Au and on CeO2 support. Within a capture zone CO can move to the active centre. By the reaction with OH-groups formate is formed as an intermediate and is stored on CeO2 and can move back to the active centres by a reverse spill-over. Using the newly developed low-pressure micro reactor measurements in the pressure range of 1000-10-2 mbar are possible. The TOF of the CO-oxidation dropped by the same amount as the pressure. The apparent activation energy decreased from 27 at 1000 to ~ 0 kJ/mole at 9*10^-2 mbar. They are regarded as a reason that the CO-oxidation with molecular oxygen on Au/TiO2 under UHV conditions was not detected yet. Experiments of the pulse shape and width, the internal pore diffusion and the CO-oxidation on the newly developed TAP reactor resembles results presented in literature. The influence of gold on the ad- and desorption behaviour of CO has been demonstrated. For CO2 ad- and desorption was detected already for the support. Carbonates were identified as reaction intermediates. By an alternating sequence of CO and O2 pulses the storage of oxygen on the catalyst was detected and quantified for the first time.