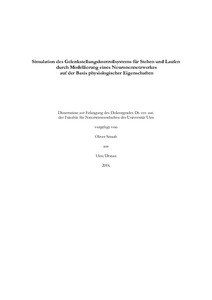 Biological systems, especially the vertebrate brain, are very complex and usually possess a large number of nerve cells to produce flexible behavioural patterns. Therefore, model systems with a lower number of nerve cells and more stereotyped behavioural patterns are used for the investigation of nervous system functions. For walking, the Femur-Tibia joint of stick insects is used rather than the human knee. While the mechanisms of walking are the same in both species, the number of contributing nerve cells is reduced from several millions in humans to some dozen in insects. In such a small system, it might be possible to answer a fundamental question in neurobiology, namely how a defined set of neurons can produce several different behavioural tasks and how to switch between these tasks. In the stick insect, the nervous system has to switch from the resistance reflex -a static joint control during standing- to the "active reaction" -the movement control of the limb- when the animal starts to walk. Due to experimental restrictions, it is still unclear whether the known network is sufficient to produce both motor commands, the resistance reflex and the "active reaction", and to switch between them or if additional neurons (of several thousands available in the central nervous system) are needed. The present work addresses this question in a simulation, which includes the structure of the neuronal network that controls the Femur-Tibia joint in as much detail as is known from physiological experiments. Neurons are modeled with the simulation environment madSim with active and passive properties according to Hodgkin-Huxley equations. The present work shows that the known network structure is able to produce the motor command for a resistance reflex. It also evinces that in the same network the according reflex reversal, an "active reaction", can be elicited. The simulation indicates that the activation or deactivation of a relaxation oscillator proves to be a possible switch between the two different motor commands for standing or walking. The relaxation oscillator induces specific changes in the weighting of parallel information pathways. Furthermore in the "active reaction" the relaxation oscillator controls the timing of the limb movement, i.e. the transition from stance to swing. The simulation reveals potential problems in the present experimental knowledge. Therefore, the simulation is extended by problem specific solutions. In this context, experimental data show a merely position dependent transition from stance to swing phase. However the simulated network is unable to maintain a specific transition position independent from different movement velocities. The simulation shows that this is caused by the historydependent integration of synaptic inputs in postsynaptic neurons. A network-based solution is proposed to provide a more accurate readout of sensory information.