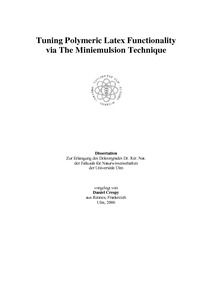 We describe in this document new advances in miniemulsion polymerizations. We investigated different po-lymerizations in miniemulsion, namely radical, anionic,and condensation polymerizations, in order to obtain different latex functionalities. First, hybrid polymer/ metal latexes were synthesized in direct miniemulsion. Hydrophobic platinum comple-xes were encapsulated in polystyrene particles matrix. These particles were deposited in an ordered mono-layer on silicon substrates due to their monodispersity. Secondly, we synthesized polyamide latexes via different techniques. Anionic polymerization was performed in inverse miniemulsion to give polyamide-6 latexes. The polyamide had a relatively high molecular weight, which was around 36 000 g.mol-1) and had less structural irregularities than the polymer prepared in bulk. Polyamide-6 dispersions in water were prepared under sonication upon addition of polyamide-6 dissolved in a water miscible solvent, to an aqueous solution containing a stabilizer. This novel process combines some features of the solvent displacement process and the miniemulsion technique. Only a small operating win-dow was found to be suitable in order to get stable submicrons particles. Polyamide-6 nanocapsules were prepared by another miniemulsion/ solvent displacement technique. Finally we investigated the synthesis of polymer latexes by polycondensation in miniemulsion. Hollow poly-meric capsules containing a hydrophilic liquid core were obtained in a simple one-pot miniemulsion process without the use of a sacrificial core. The polyurea, polythiourea or polyurethane shells are made by polycon-densation at the interface of the droplets. Capsules loaded with silver nanoparticles were synthesized upon reduction of silver nitrate encapsulated in polyurea shell.