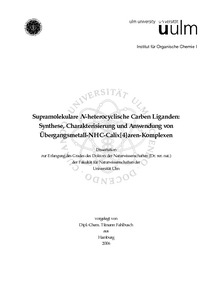 In the present work different substituted imidazolium salts based on benzenes and calix[4]arenens were synthesized. In this connection, a proximal imidazolium substituted calix[4]arene was described for the first time. In the following it was shown that imidazolium substituted calix[4]arene could easily be converted into the corresponding silver-NHC-calixarene-complexes which were successfully used as supramolecular carbene transfer reagents in the silver-NHC-complex mediated transmetallation. By transfer of the corresponding NHC-calixarene-ligand new platinum-, iridium-, ruthenium- and palladium-NHC-calixarene-complexes with different coordination geometries were synthesized. A detailed spectroscopic and structural characterization of the individual complexes was achieved by means of spectroscopic and mass spectrometric methods which were partly supplemented by quantum chemical calculations. Furthermore, synthesized ruthenium- and palladium-NHC-calixarene-complexes were investigated concerning their catalytic activity in the ring closing olefine metathesis (RCM) and the Suzuki Miyaura reaction respectively.