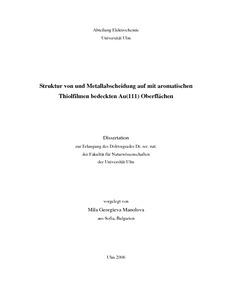 The topic of the current work was a structure investigation of thiol films aromatic on Au(111) and the metal deposition on so-called self-assembled monolayers (SAMs). Thiophenol (TPh), dithiophenol (DTPh), biphenyldithiol (BPDT), and 4-mercaptobenzoic acid SAMs on Au(111) were studied in detail by cyclic voltammetry and in-situ scanning tunnel microscopy (STM). Furthermore, we studied the metal deposition onto these SAMs, as well as on aminothiophenol (ATPh) and 4,4’-dithiodipyridine (4-PySSPy) SAMs. The important question, where is the metal situated: under, in or on the SAM, was answered 1) indirectly using electrochemical methods and 2) directly using angle-resolved X-ray photoelectron spectroscopy (XPS). The metal deposition onto the SAM was an important aspect of the current work. The task was impossible to be solved by the usual metal deposition from the solution because of the strong tendency of the metal to bind directly to the substrate. For that reason a new technique was developed in our department: in a first step a complex was formed between the functional groups of the SAM and the metal ions of the solution; in a second step the electrode was brought in a metal free electrolyte where the reduction of the metal ions on the SAM occurred. Using this method Pt was deposited onto a 4-PySSPy SAM. Monoatomic high Pt islands occupying 20% of the surface were observed by STM. An increase of coverage was achieved through longer complexation times or through more complexation cycles. Angle-resolved XPS studies gave a proof that Pt was deposited on 4-PySSPy-layer. Rh was deposited on a 4-PySSPy-SAM with the same method. A maximum coverage (30%) of the surface was obtained after 5 min of incubation in a Rh solution. After the second complexation we could observe the formation of the second metal layer. A coverage of 80% was obtained after the third complexation. After the fourth time more islands of the second layer were found.