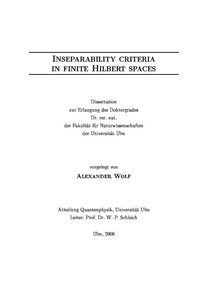 As soon as the concept of entanglement was introduced a controversy about its correct interpretation has originated. Today, more than 70 years later, the problem has not been completely resolved. One of the most important reasons for this, is the fact that we still don"t have an applicable criterion to decide whether a quantum system is entangled or not. The aim of the present thesis is to provide such a criterion. To solve this problem we use, the geometrical representation of Hermitian operators in the Hilbert-Schmidt vector space to map the problem of separability to a problem in convex geometry. By using this representation we derive certain inequalities, the violation of which is a signature of entanglement in a quantum state in complete analogy to Bell"s argument. We also show how witness operators can be recovered from our formalism. In order to solve the problem of separability we proceed in two steps: we first derive a sufficient inseparability criterion based on the singular value decomposition, which in analogy to the Peres-Horodecki criterion is easy to check, because no complicated optimization problems have to be solved. This criterion can prove the entanglement of states for which the Peres-Horodecki criterion fails and thus by combining both criteria we can significantly enlarge the class of inseparable states that can be detected. In the second step we derive an optimization problem the positive solution of which is a necessary and sufficient signature of entanglement. We show that this optimization problem can be solved by using the methods of operations research and we develop an algorithm which accomplishes this task. The latter can be implemented on modern computers and be efficiently solved for Hilbert spaces with up to 1000 dimensions.