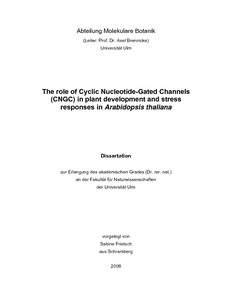 Dynamic ion fluxes are critical to regulating many signaling pathways in eukaryotes. In plants, the underlying ion transporters and their physiological function remain largely unknown. Using Arabidopsis as a model system, seven mutants with gene disruption in a Cyclic Nucleotide-Gated Channel (CNGC) were identified with altered responses to abiotic stress. Genetic analysis of two gene disruptions in CNGC18 demonstrates complete male sterility. While cngc18 pollen can germinate, the mutant pollen tubes appear to be short, kinky, and often thin growing without a clear direction. In vivo histochemical staining revealed that cngc18 pollen fail to grow into the transmitting tract of a pistil. Analysis of the subcellular localization of a GFP-tagged CNGC18 in complemented cngc18 mutants reveals asymmetric localization consistent with the plasma membrane at the growing pollen tip. Thus, this tip-focused localization of CNGC18 could provide a mechanism to directly transduce a cNMP signal into Ca2+-signals that regulate the pollen tube tip growth machinery. cngc9-2 mutants are hypersensitive to Ca2+ as evident by wavy looking root and callus-like tissue formation in root and shoot. The observed phenotypes suggest altered auxin and/or cytokinins levels or a defect in signaling and perception of these hormones. Increased transcript levels in cngc9-2 can explain enhanced Ca2+ accumulation in comparison to wild-type plants when grown on high Ca2+ indicating that CNGC9 might be permeable to Ca2+. Further analyses are required to determine a potential role of CNGC9 in plant hormone signaling as well as the ion accumulation profile. The analyses presented in this thesis identify a crucial role of a CNGC in regulation of polarized tip growth and suggest involvement of another CNGC in plant hormone responses. Together these findings suggest a much more widespread role of CNGCs in regulating plant development than previously thought.