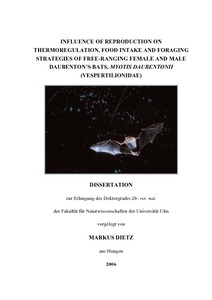 Balancing the energy demand of reproduction in bats requires specific physiological and behavioural adaptations. Part of my thesis thus focussed on the use of daily torpor in M. daubentonii during colder ambient temperatures and reduced food availability, an aspect that strongly influences foetal development and probably also spermatogenesis but that has been little studied to date for free-ranging bats. This also applies for a detailed knowledge about food intake and foraging behaviour of female and male bats during different reproductive periods. I selected the insectivorous Daubenton’s bat as study species because it is rather common and its characteristic flight low over water surfaces facilitates identification and observations of its feeding behaviour in the field. Myotis daubentonii is widely distributed in the Palaearctic region throughout Europe and Asia. It is small with a mass of only 7 - 15 g, a wingspan of 240 - 275 mm and characteristic large feet. As all other insectivorous bats in the temperate zone, Daubenton’s bat shows a distinct reproductive periodicity that is thought to mainly follow seasonal variations in food availability. The study took place from 1992 - 2003 near the City of Giessen next to the river Lahn. My thesis is structured in four chapters, each representing a separate publication. In chapter 1 I analysed to which degree reproductive female and male Daubenton’s bats use daily torpor to reduce daily energy expenditure. In chapter 2 I assessed the variations in flight activity between females and males as well as within the sexes during the different reproductive periods. In chapter 3 I estimated food intake and ingested energy of female and male Daubenton’s bats during pregnancy and spermatogenesis. In chapter 4 I analysed the distribution and relative abundance of foraging Daubenton’s bats at water bodies in the lowlands and in the surrounding uplands of my study area.