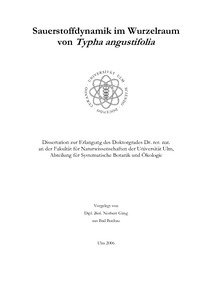 Emergent aquatic plants have their below ground organs in anoxic sediments. To maintain aerobic root respiration oxygen has to be transported from aerial plant parts. In addition to their own consumption, roots loose oxygen (radial oxygen loss; ROL) to soil. The aim of this study was to analyse the influence of water level fluctuation on the dynamics of soil oxygen content within Typha angustifolia vegetation. Moreover the impact of edaphic and climatic conditions on substrate oxygenation was determined. To clarify these influences, field experiments were undertaken at the Kuybyshev water reservoir (Tatarstan Republic, Russia) supported by experimental set-ups in a phytotron at the University of Ulm. In the field, free oxygen was measured during periods with low water table. The decline in oxygen content with increasing water levels tended to be more efficiently buffered in the T. angustifolia plots than in control plots. Phytotron measurements showed that oxygen content depended on microbiological activity. Under all climatic conditions the oxygen content in hydroponic solution with lower microbial activity was higher than in control. A further experiment showed a tight correlation between saturation in rhizome and oxygen content in substrate. The highest oxygen levels in the rhizomes (sometimes over 100 %) and in the substrate (2 - 4 mg l 1) were found at a water vapour pressure deficit (VPD) of 0.8 kPa. Oxygen values in the substrate decreased at a VPD of 1.5 kPa and were almost zero at a VPD of 1.9 kPa. Thermal transpiration and/or humidity-induced gradients promote oxygen inflow into the leaf through open stomata. Additional oxygen is supplied by photosynthesis during such conditions.The results suggest that the ROL of T. angustifolia is not sufficient to produce homogeneous oxidized sediments. In fact, oxygen release is only found at strictly confined locations of the roots. These locations are moving through the substrate with root growth ("moving source").