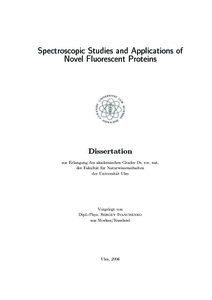 Fluorescent proteins (FPs) are often found in marine organisms. Since the discovery of the first green fluorescent protein (GFP) in a jellyfish Aequorea victoria in 1962, FPs became widely employed in cellular applications. FPs do not require any cofactors to become fluorescent and can be fused virtually to any protein of interest on a genetic level. Owing to these advantages, they are utilized as markers of gene expression, probes of protein-protein interaction and cellular environment as well as in many other tasks. Development of novel fluorescent marker proteins was for a long time driven by the evolutionary approach of random mutagenesis. The relation of many spectroscopic phenomena to structure remains poorly understood, which prevents researchers from rational development of fluorescent proteins. Here we present spectroscopic studies of two fluorescent proteins eqFP611 and EosFP and their genetic variants. The former protein, eqFP611, is a red fluorescent protein, having excitation and emission maxima at 559 nm and 611 nm, respectively, which makes it the most red-shifted naturally occurring FP. The latter protein, EosFP, is a green FP, which undergoes irreversible photoconversion from a green to a red-emitting form upon UV illumination. EosFP is a next step in labeling techniques as it offers a more precise definition of the region of interest compared to standard FPs. By using a focused UV beam, it is possible to locally label a smaller fraction of FP-tagged proteins and follow its migration pathway.