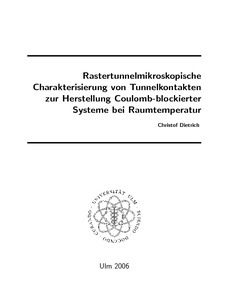 The subject of this work is the preparation and the characterization of systems showing Coulomb blockade at room temperature. The preparation of the nanoparticles was chosen to base on the micellar method which has been developed in Ulm and the system Al2O3/Nb(110)/Sapphire was used as a support. In this work it could be shown that it is possible to prepare an array of hexagonally ordered nanoparticles with a narrow size distribution on Al2O3/Nb(110)/Sapphire exhibiting dynamic charging at room temperature. As base electrode of the Coulomb-system, epitaxially grown Nb(110) on Sapphire has been used. A key element of systems showing Coulomb blockade is the tunneling barrier. For that a thin Al layer was evaporated on top of the base electrode, Nb, and oxidized with two different methods (plasma oxidation and thermal oxidation). As a quantum dot for the systems showing Coulomb blockade, gold nanoparticles have been prepared on the described base system. STS on the Coulomb blocked systems showed single-electron charging effects at room temperature for up to 70 percent of the particles. The junction parameters as deduced from the measurements had a large variation and different lineshapes could be measured. It could be shown that the variations of the parameters in dependence of the tip particle separation behave in the expected way. Also, the dependence of the parameters on the radius of the nanoparticle could be extracted. In many measurements an unexpected dependence of the parameters on the position of the tunneling tip relative to the nanoparticle could be observed. To show this dependence a Coulomb mapping has been developed. Finally, low temperature measurements on FePt nanoparticles also showed single-electron charging effects which could be nicely explained by the orthodox theory of the Coulomb blockade. In some cases different effects showed up.