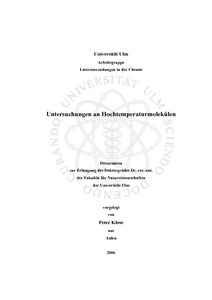 A molecular beam apparatus was developed for the investigation of high temperature molecules. A pulsed heated nozzle with cooling is the sample source for a supersonic molecular beam of high temperature molecules; it can be operated up to 760 ° C. The available frequency range for 2C-REMPI experiments is expanded considerably by the combination of an Excimer and Nd:YAG pumped laser system. This enables the pump-probe technique for two-colour REMPI experiments. The experiments with the metal hydrides revealed the difficulty of combining synthesis with the REMPI experiment in the existing apparatus. By use of the pulsed heated nozzle with cooling, some new results were achieved on substances with high melting points. For the first time MPI mass spectra of CuCl and of the LiCl dimer were recorded. It was possible for the first time to record MPI mass spectra of sulphur vapour. Although S, S2, S4 and S8 were present in the spectra, the natural composition of sulphur vapour cannot be reproduced with this experiment.The mass spectra of InCl were also highly fragmented. By application of the 2C-REMPI pump-probe technique it could be shown that the observed fragmentation originates from the electronic states A, F and G of InCl and is induced by a single photon absorption. As a product of this fragmentation atomic Indium in its first excited electronic state 5p 2P03/2 was identified. Spectra of the fundamental band of lithiumfluoride and -chloride were recorded and the dipole moment functions of the molecules were determined through intensity analysis of the transitions. The examination showed that the DMF of these molecules can be described with a double-harmonic approximation of the Herman-Wallis effect. The comparison with MBER data demonstrates that relative reliable DMFs can be obtained by this analysis. This is the first systematic investigation concerning the meaning of dipole moment functions obtained by intensity analysis.