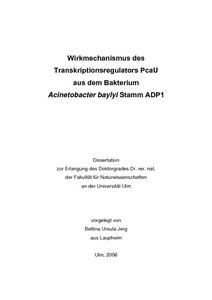 The subject of this thesis is the identification of the regulatory mechanisms that control protocatechuate degradation in Acinetobacter baylyi. The projects focused on the intergenic region of the pca operon between the regulatory pcaU gene und the structural gene pcaI. The unusual qualities of PcaU, a member of the new IclR family of transcriptional regulators, is its bifunctionality at one promoter. Depending on the inducer concentration, it acts as a repressor or activator at pcaIp and in addition it represses its own gene expression. PcaU binds to the pcaI-pcaU intergenic region, containing repetitive motifs (R1+ R2) and a direct sequence repeat (R3). The DNA displays strong intrinsic bending centered within the repetitive motive R2 und R3 of the binding site with a bending angle of 72 °. In this investigation analysis of the PcaU binding site had been done in vivo as well as in vitro to address the regulatory situation upon the degradation of protocatechuate. A method for site-directed mutagenesis of the PcaU binding site by a marker exchange strategy involving a sacB-km cassette has been successfully created. Changes of the distance and the orientation of the PcaU binding site relative to the promoter by 5/ 10 bp are critical, and influence the DNA bending and the expression level. The effect of the site-directed mutagenesis of the PcaU binding site R1, R2 and R3 on pca gene expression were measured by luciferase activity. Substitutions in the binding motifs have a decreasing effect on pca gene expression and PcaU-DNA affinity. The integration of an W cassette deactivated the regulatory gene pcaU and resulted in a PCA-dependent, but PcaU-independent regulation. To allow an easy purification of the regulator PcaU by affinity chromatography, it was expressed as an oligohistidine fusion in E. coli.