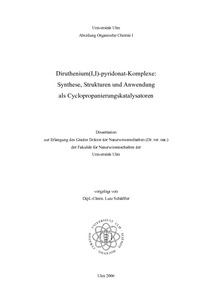 Dinuclear diruthenium(I,I)-complexes with bidentate 6-substituted pyridonate bridging ligands were synthesized as well in the head-head as in the head-tail constitution, characterized and used as catalysts for carbenoid cyclopropanations. While a significant influence of the 6-substituent at the pyridonate ligands is only expected from the head-tail constituted complexes, there is hardly any chance for an experimental realization of this connection. In this work the rearrangement from head-head to head-tail orientation of the pyridonate ligands in the presence of coordinating donor ligands was examined. The rearrangement is also likely to take place during the carbenoid cyclopropanation. In this case all reactions would happen under participation of such metal-carbene reactive intermediates, in which the pyridonate ligands have a head-head orientation and the transfer of the carbene ligand takes place at the steric unhindered, O,O-substituted ruthenium atom of the dinuclear complex.