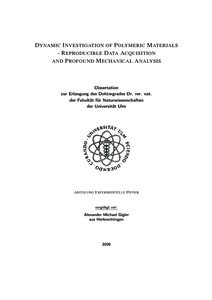 By means of the Atomic Force Microscope (AFM), the mechanical properties at nanoscale dimensions can be accessed. Theories and simulations describing these nano-mechanics, however, are not yet conclusive. The reliable and reproducible acquisition of AFM data has often been doubted. The AFM, however, is able to determine the mechanical behavior of surfaces reproducibly if the apparatus is calibrated thoroughly before and after the measurements are taken. With the Digital Pulsed Force Mode (DPFM) technique, it is possible to access the entire spectrum of sample dynamics and indentation behavior. From the experiments, a recipe for the reliable acquisition of AFM data has been constructed. Furthermore, an algorithmic framework based on contact mechanical models has been developed and implemented as evaluation software. This software allows the quantitative evaluation of entire data sets acquired in DPFM experiments. This amount of data has not been evaluated before, and thus adds an important statistical certainty to the results obtained from the measurements. In addition to the polymer mixture, which is a passive sample system, experiments have also been conducted on living cells. Operating the DPFM in a physiologic buffer solution allowed acquisition of maps of the mechanical response. Another field that is accessible by the AFM techniques is the determination of the lateral force between an indenter and a sample under an additional lateral relative movement. This is known as Dynamic Friction Force Microscopy (DFFM). However, the relative speeds between the tip and the sample are generally rather low and not comparable with speeds that occur in macroscopic reality. To gain more information on the lateral forces occurring at these velocities, a special add-on system to the AFM has been devised, which makes realistic velocities of several centimeters or even meters per second accessible.