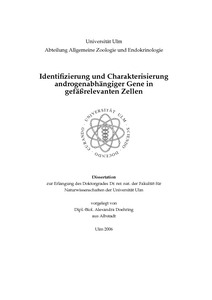 Cardiovascular diseases are the leading cause of mortality in developed countries. Atherosclerosis represents the most important and most common change in vessels. It is characterized by intimal thickening owing to cellular and lipid accumulation. The age-adjusted morbidity rates from coronary artery disease are lower in premenopausal women than in men. This gender disparity has been interpreted primarily as reflecting estrogen-mediated protection against atherosclerosis, but this belief was not confirmed by prospective clinical trials. The effects of androgens on the cardiovascular system and cardiovascular diseases are even more controversial. In this thesis the androgen-dependent gene expression was investigated in two vascular cellular systems. In both model systems androgens had different effects on the mRNA and protein amounts of several factors with cardiovascular relevance. The influence of testosterone over various biological functions (e.g. lipid metabolism, coagulation, cell-cell-adhesion, apoptosis) can be interpreted as both pro- and antiatherogenic. In recent years, there has been a dramatic increase in research into androgen effects on the cardiovascular system. Whereas previously androgens were considered harmful, most current studies, including the present thesis, suggest a neutral or even beneficial effect of androgens on the male cardiovascular system; but their net effect remains unclear. Clearly, further experimental and clinical trials are required before any definitive conclusions can be made about the physiological and pathological role of sexual hormones in the cardiovascular system.