High-resolution studies of chromatin arrays and their salt-dependent compaction 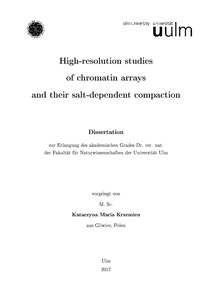 Compaction of long DNA molecules into the small cell nucleus is accomplished through an elaborate structure called chromatin. This DNA-protein complex is a hallmark of the nucleus of the eukaryotic cell and unravelling its structural details is mandatory for a better understanding of all DNA-involving processes, especially for full comprehension of transcription, recombination and replication. The structure of the basic chromatin unit, the nucleosome, is well known since the end of the last century. In contrast, despite strong experimental efforts, many questions concerning the DNA packing at higher levels are still open. In particular, whether a highly ordered structure, often-times referred to as the "30nm fibre" exists in vivo is the cause for an ongoing controversy in the scientific community. In last decades, development of the molecular biology tools allowed to produce chromatin and nucleosomal arrays from recombinant proteins, introducing a model structure for chromatin experiments in vitro. In this PhD thesis I establish protocols for preparing human recombinant nucleosome arrays. Furthermore, I employ various single-molecule and high-resolution microscopy methods to investigate the structure of chromatin arrays under different sodium chloride concentrations. The results provided by Atomic Force Microscopy (AFM), a cutting-edge tool for high-resolution imaging of DNA-protein complexes, turned out to be especially valuable. Here, I present results from high-resolution AFM of non-cross-linked chromatin arrays in liquid, under different salt concentrations. A detailed statistical analysis of the imaging data reveals that the array compaction is salt-dependent, however in a non-monotonic fashion. Nevertheless, the presented data do not provide any support for the existence of regular chromatin fibres for the investigated arrays. Instead, they show chromatin arrays as highly dynamic structures, strongly influenced by NaCl concentration. These studies shed a new light upon chromatin and thus contribute to a deeper understanding of the mechanisms of DNA condensation.