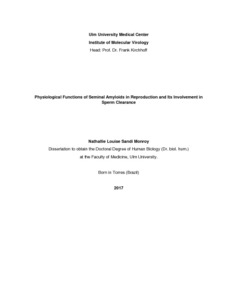 Seminal amyloids derived from two abundant semen proteins have been identified due to their ability to enhance HIV-1 (human immunodeficiency virus) infection in vitro. However, their physiological role remained to be studied. As seminal amyloids inhibit fertilization in vitro by entrapping motile sperm, one of the aims of this work was to elucidate their involvement in male infertility. Furthermore, this work aimed to elucidate which semen characteristics are important for the fibril-dependent enhancement of HIV-1 infection. Therefore, we detected and purified them from fresh semen. Additionally, this work sought to clarify which sperm population becomes entrapped, how the fibrils can be degraded and which physiological role this may present in vivo. In a multiparameter analysis of more than 100 donors, opposed to the expected results, we found that seminal amyloids do not correlate with male infertility. On the contrary, infertile donors tended to present lower concentrations of seminal amyloids than fertile/subfertile donors. On the other hand, amyloid content in semen positively correlated with infectivity enhancement, strengthening the fact that semen´s potential to enhance HIV-1 infection depends directly on seminal amyloids. Amyloid content also positively correlated with age, as shown for other forms of amyloidosis. Moreover, increased concentrations of clusterin, an extracellular chaperone, do not prevent amyloid formation. Interestingly, amyloid content negatively correlated with luteinizing hormone (LH) and follicle-stimulating hormone (FSH) but not with testosterone, suggesting that the presence of amyloids in semen is not hormone-regulated as for other amyloid-related diseases. In addition, semen viscosity and pH negatively correlated with infection enhancement but not with amyloid content, indicating that not only the presence and total concentration of amyloids but also the physical properties determine their infectivity enhancing potential. Endogenous seminal amyloids could be successfully detected and quantified in unmodified semen by confocal microscopy using an amyloid-sensitive dye, ProteoStat®. With this method, semen samples from selected donors were analyzed but no correlation between fertile and infertile donors regarding amyloid content could be observed. In fact, the presence of large fibril aggregates was a rather rare finding. Furthermore, seminal fluid itself increased the percentage of immotile spermatozoa and decreased the mean amplitude of lateral head displacement. These findings may be related to the presence of amyloids or other motility-inhibiting molecules in semen. Moreover, synthetic seminal fibrils were not degraded by abundant seminal or vaginal proteases but by seminal fluid itself, suggesting that a mixture of different enzymes is responsible for degradation of seminal amyloids and probably also the release of entrapped spermatozoa within hours after ejaculation in vivo. Additionally, seminal amyloids did efficiently entrap apoptotic spermatozoa and avoid that sperm cells swim-up. However, the preferential entrapment of apoptotic cells did not result in an efficient selection of defective spermatozoa in the swim-up assay. These results suggest that spermatozoa entrapment by seminal fibrils is not the only factor in selecting the fittest sperm to continue its journey in vivo. In this rationale, our collaborators tested whether seminal amyloids are involved in spermatozoa clearance. They showed that healthy and damaged spermatozoa can be promptly phagocytosed by macrophages and that semenogelin (SEM) fibrils are able to increase phagocytosis kinetics. Besides, macrophages phagocytosed preferentially damaged sperm cells, whose uptake was 3 fold increased in the presence of SEM fibrils. In order to verify the results produced with fibrils formed by synthetic peptide, endogenous seminal amyloids were purified and shown to behave in a similar manner in entrapment of human spermatozoa compared to their synthetic counterparts. In conclusion, seminal amyloids exert a unique quality control function. The results presented herein sustain their role as functional amyloid, as its presence in semen does not correlate with male infertility and its effects on spermatozoa movement facilitate sperm clearance in the lower female reproductive tract. Finally, spermatozoa entrapment in vivo may be a well-regulated mechanism, with viable, healthy cells being quickly released from entrapment, due to the action of seminal and vaginal proteases, and apoptotic, defective sperm retained for macrophage clearance. These results give the first insights into the physiological role of seminal amyloids.