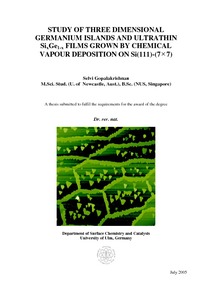 This work probed at the atomic level, processes that occur during the Ge three dimensional island formation and on ultrathin SixGe1-x epitaxial growth by chemical vapour deposition on the Si(111)-(7x7) substrate with the aid of surface probe techniques such as STM and AFM, XPS, as well as TEM imaging of any 3D island formation. This work could essentially be divided into two parts. The first part studied the growth of the strained Ge on Si system with emphasis on the characterization of the CVD grown three dimensional germanium islands on a standard Si(111)-(7x7) substrate as well as on a surface modified Si(111)-(7x7) substrate. The characterization was carried out using a combination of techniques. XPS was used to calculate the effective coverages of deposited germanium, the STM was used to image the top most layers whenever possible and AFM, cross-sectional TEM and HRTEM to image the three dimensional islands. The possible causes of the surface modification were also examined. In the second part of this work the growth morphologies ultrathin SixGe1-x layers grown on the Si(111)-(7x7) substrate at 750 K where the hydrogen desorption rate from the Si(111) surface is low and at 850 K which was the temperature at which the rate of hydrogen desorption from the Si(111) surface was a maximum were investigated. In addition modelling of ultrathin layer growth was carried out using two existing growth models.