Newton flow of the Riemann zeta function: separatrices control the appearance of zeros 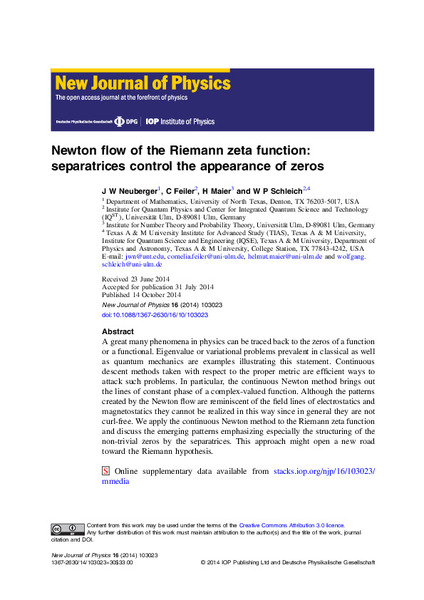 Abstract A great many phenomena in physics can be traced back to the zeros of a function or a functional. Eigenvalue or variational problems prevalent in classical as well as quantum mechanics are examples illustrating this statement. Continuous descent methods taken with respect to the proper metric are efficient ways to attack such problems. In particular, the continuous Newton method brings out the lines of constant phase of a complex-valued function. Although the patterns created by the Newton flow are reminiscent of the field lines of electrostatics and magnetostatics they cannot be realized in this way since in general they are not curl-free. We apply the continuous Newton method to the Riemann zeta function and discuss the emerging patterns emphasizing especially the structuring of the non-trivial zeros by the separatrices. This approach might open a new road toward the Riemann hypothesis.