Scattering of a particle with internal structure from a single slit: exact numerical solutions 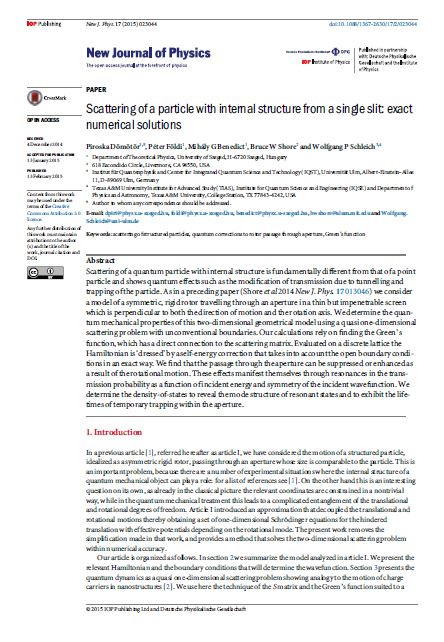 Abstract Scattering of a quantum particle with internal structure is fundamentally different from that of a point particle and shows quantum effects such as the modification of transmission due to tunnelling and trapping of the particle. As in a preceding paper (Shore et al 2014 New J. Phys. 17 013046) we consider a model of a symmetric, rigid rotor travelling through an aperture in a thin but impenetrable screen which is perpendicular to both the direction of motion and the rotation axis. We determine the quantum mechanical properties of this two-dimensional geometrical model using a quasi one-dimensional scattering problem with unconventional boundaries. Our calculations rely on finding the Green's function, which has a direct connection to the scattering matrix. Evaluated on a discrete lattice the Hamiltonian is ‘dressed’ by a self-energy correction that takes into account the open boundary conditions in an exact way. We find that the passage through the aperture can be suppressed or enhanced as a result of the rotational motion. These effects manifest themselves through resonances in the transmission probability as a function of incident energy and symmetry of the incident wavefunction. We determine the density-of-states to reveal the mode structure of resonant states and to exhibit the lifetimes of temporary trapping within the aperture.