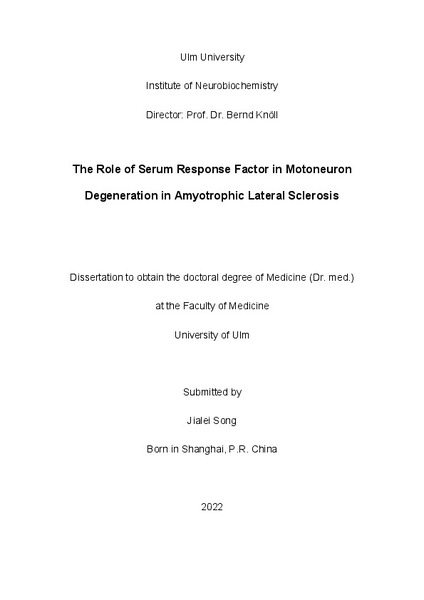 Background and purpose: Alterations of neuronal excitability has been recently characterized as an important vulnerability modulator of motoneurons (MNs) in multiple neurodegenerative diseases including amyotrophic sclerosis (ALS). The serum response factor (SRF) has been known as a neuronal activity dependent transcription factor regulating various genes which are beneficial for neuronal outgrowth, regeneration and survival. The role of SRF in ALS MNs during disease progression is poorly understood so far. In this thesis, SRF expression and its function in MNs were investigated during the process of MN degeneration in ALS. Methods: Transgenic mice with a point mutation (G93A) in the human superoxide dismutase gene (huSOD1G93A) was used as an established ALS mouse model. In these mice, Srf was specifically deleted in MNs. Behavior tests (body weight, neurological score, grip strength, inverted grid test, pole test and survival analysis) were carried out to evaluate the motor ability, disease progression and survival. Mice were fixed with perfusion at multiple timepoints and immunofluorescence was performed for protein detection and colocalization. Mice lumbar spinal cords were harvested and frozen in liquid nitrogen for RNA isolation and gene expression detection with qPCR. Human spinal cords of ALS patients were used for immunohistochemistry (IHC). Fluorescence images were acquired on confocal microscopy and IHC images were acquired on brightfield microscopy. Images were quantified in ImageJ. Statistical analysis was performed in GraphPad. Bioinformatic analysis was performed using Eukaryotic Promoter Database. Results: Expression analysis revealed higher SRF levels in a subpopulation of MNs which were more vulnerable to ALS and are typically earlier affected. SRF levels in the vulnerable population of MNs were decreased in the SOD1G93A model of ALS over time. MN-specific SRF deletion in SOD1G93A model led to an earlier disease onset, characterized by a lower body weight, worse neurological score, lower grip strength, and worse outcomes from inverted test and pole test. Furthermore, a stronger microgliosis, a more pronounced neuromuscular junction (NMJ) denervation and an increased misfolded protein burden were observed after motoneuronal SRF ablation in the SOD1G93A mouse model. Interestingly, the effect of SRF deficiency vanished at later phase of disease progression, characterized by no change of motor disability or NMJ denervation. SRF was recognized as a potential regulator of autophagy related genes to maintain the intracellular proteostasis in MNs in the SOD1G93A model of ALS. The significantly different level of proteins involved in the macro-autophagy pathway in MNs in early disease phase indicated an impairment of autophagy in the SRF-deficient MNs in SOD1G93A. The bioinformatic analysis revealed that SRF could be directly binding at the cytosine adenine rich guanine (CArG) boxes in the promoters of some autophagy related target genes. SRF was expressed in MNs of ALS patient samples and SRF appeared to be mislocalized in some human ALS MNs. This supports a high translational relevance of mouse data obtained to the human disease condition. Conclusion: SRF was recognized as a modulator of vulnerability in ALS MNs. A beneficial effect of SRF was recognized by a loss of function model in ALS mice which showed faster disease progression and NMJ denervation after SRF ablation. Impaired autophagy was noticed in ALS MNs with Srf deficiency at protein level. Several autophagy related genes containing CArG boxes in their promoters were predicted to be target genes of SRF. These data suggest a new connection of SRF and autophagy.