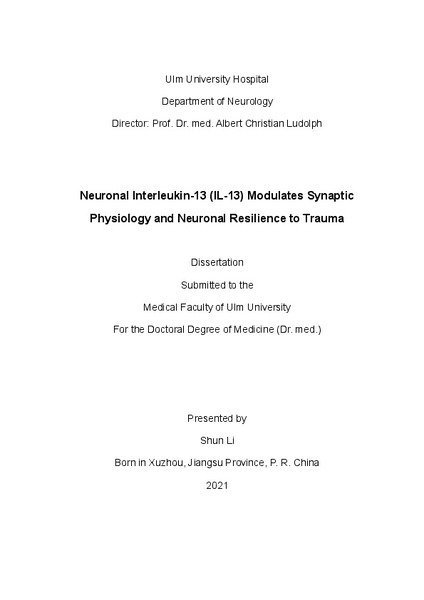 Background and purpose: Synaptic remodeling is not only essential for memory and learning, but also for acute and long-term responses to pathological conditions. Our previous study suggests that Interleukin-13 (IL-13) may also have a neuronal origin and may have neuromodulatory properties, which may affect learning processes. IL-13, an anti-inflammatory cytokine, has been reported to protect against demyelination and spinal cord injury through immunomodulation. The function of IL-13 and interleukin-13 receptor (IL-13R) in synaptic physiology, however, remains unclear. Methods: First, we immunostained mouse cortical sections for IL-13, IL-13Rα1 and synaptic markers. Second, we sought an independent confirmation of the synaptic nature of IL-13 and IL-13Rα1 using a brain fractionation protocol to isolate distinct cellular subcompartments. Third, we explored IL-13 and IL-13R expression and immunolocalization in dissociated culture of rat cortical neurons. Next, we treated cultured cortical neurons with IL-13 to detect whether IL-13 would elicit a signaling cascade by immunostain. Moreover, we performed the multiplexed single-molecule mRNA hybridization for VGLUT2 and IL-13. Furthermore, we used the Single-Molecule Array (SIMOA) platform to measure the concentration of IL-13 and Tumor necrosis factor-α (TNF-α) in the Cerebral spinal fluid of patients with moderate-severe traumatic brain injury (TBI). Finally, neuronal cultures were exposed to glutamate to simulate an acute excitotoxic environment associated with traumatic injury and investigated the function of IL-13 in this situation. Results: We investigate the biological relevance of neuronal IL-13. We demonstrate that IL-13 and IL-13Rα1 are synaptic components expressed in rat, mouse, and human neurons in an activity-dependent manner in normal conditions and, most notably, upon traumatic brain injury. Furthermore, we show that IL-13 increases synaptic activity and neuronal firing ultimately driving the phosphorylation of several transcription factors including Extracellular signal-regulated kinase (ERK), Signal transducer and activator of transcription 6 (STAT6), STAT3 and cAMP response element binding protein (CREB). Finally, we reveal that IL-13 treatment reduced the vulnerability of neurons to excitotoxicity in a Janus kinase (JAK)/STAT6 dependent manner. Conclusion: To summarize, our research demonstrated that IL-13 was a neuron-derived factor released from the presynaptic terminal and acts on IL-13Rα1 in the postsynaptic structure. In addition, IL-13 protected neurons against excitotoxic insults. Taken together, IL-13 may represent potential immunotherapy to improve recovery from TBI.