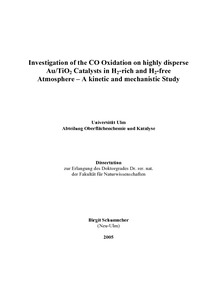 Au/TiO2 catalysts prepared via a modified deposition precipitation on P25 from Degussa showed a higher reproducibility with respect to the activity. The use of pure anatase as support material resulted in a worse reproducibility. For both kinds of catalysts mainly water was observed as side product during CO oxidation in H2-rich atmosphere, while in H2-free atmosphere carboxylates/formates, monodentate and bidentate carbonates were identified as side products. The build-up of carboxylates from adsorbed CO and OH-groups, its transformation to monodentate carbonate and afterwards to the thermally instable bidentate carbonate was found to be a reaction path and first preliminary results indicate that this is the primary reaction mechanism. An equilibrium of OH-groups and adsorbed water was identified. The amount of adsorbed water correlates with the activity of the catalyst. Since a loss of water and therefore OH-groups from the catalytic system was detected in H2-free atmosphere, the stronger deactivation under these conditions can be explained by the lack of water. CO adsorbed only on the gold particles in both atmospheres. In H2-rich atmosphere the development of a new species was observed. The CO reaction order was also influenced by the presence of H2 - it was significantly higher than in H2-free atmosphere. The reaction order of oxygen was not influenced by hydrogen, but in the pressure gap it decreased with decreasing total pressure. An estimation of the reaction probability in the 10-6-10-7 mbar range showed that the amounts of produced CO2 are beneath the detection limit. Experiments with isotope labeled gases revealed that (i) oxygen does not dissociate on the catalyst surface and (ii) CO neither makes isotope exchange with the TiO2 support nor reacts with the support oxygen, which excludes a Mars-van Krevelen mechanism under the present conditions. CO2 on the other hand undergoes oxygen isotope exchange with the support.