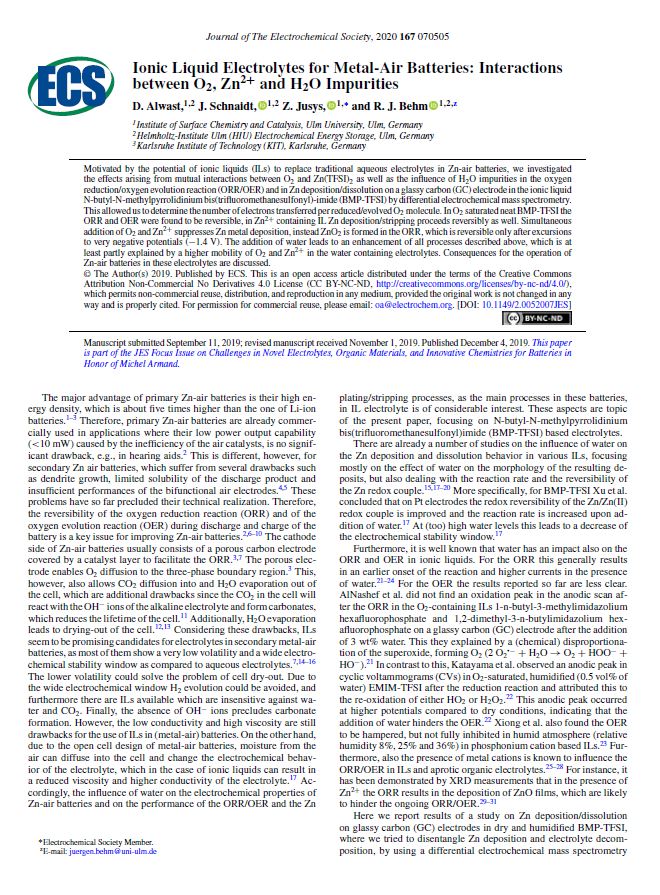 Motivated by the potential of ionic liquids (ILs) to replace traditional aqueous electrolytes in Zn-air batteries, we investigated the effects arising from mutual interactions between O2 and Zn(TFSI)2 as well as the influence of H2O impurities in the oxygen reduction/oxygen evolution reaction (ORR/OER) and in Zn deposition/dissolution on a glassy carbon (GC) electrode in the ionic liquid N-butyl-N-methylpyrrolidinium bis(trifluoromethanesulfonyl)-imide (BMP-TFSI) by differential electrochemical mass spectrometry. This allowed us to determine the number of electrons transferred per reduced/evolved O2 molecule. In O2 saturated neat BMP-TFSI the ORR and OER were found to be reversible, in Zn2+ containing IL Zn deposition/stripping proceeds reversibly as well. Simultaneous addition of O2 and Zn2+ suppresses Zn metal deposition, instead ZnO2 is formed in the ORR, which is reversible only after excursions to very negative potentials (−1.4 V). The addition of water leads to an enhancement of all processes described above, which is at least partly explained by a higher mobility of O2 and Zn2+ in the water containing electrolytes. Consequences for the operation of Zn-air batteries in these electrolytes are discussed.