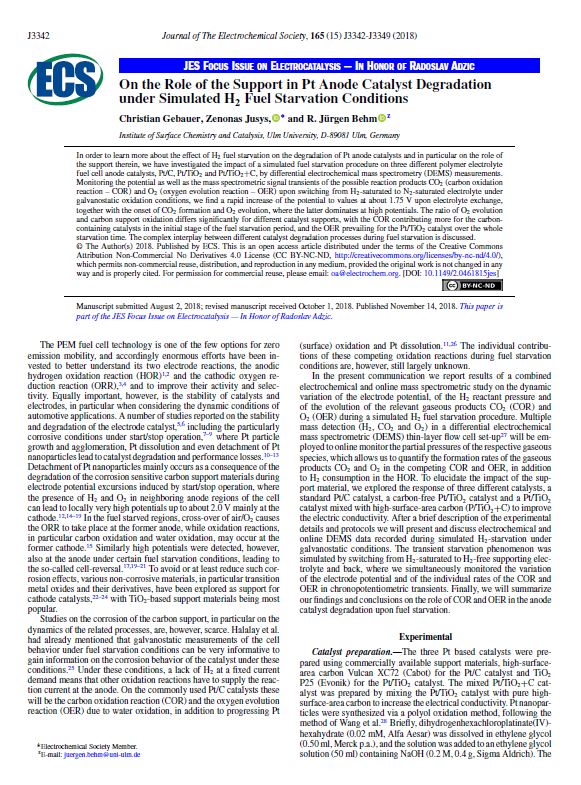 In order to learn more about the effect of H2 fuel starvation on the degradation of Pt anode catalysts and in particular on the role of the support therein, we have investigated the impact of a simulated fuel starvation procedure on three different polymer electrolyte fuel cell anode catalysts, Pt/C, Pt/TiO2 and Pt/TiO2+C, by differential electrochemical mass spectrometry (DEMS) measurements. Monitoring the potential as well as the mass spectrometric signal transients of the possible reaction products CO2 (carbon oxidation reaction – COR) and O2 (oxygen evolution reaction – OER) upon switching from H2-saturated to N2-saturated electrolyte under galvanostatic oxidation conditions, we find a rapid increase of the potential to values at about 1.75 V upon electrolyte exchange, together with the onset of CO2 formation and O2 evolution, where the latter dominates at high potentials. The ratio of O2 evolution and carbon support oxidation differs significantly for different catalyst supports, with the COR contributing more for the carbon-containing catalysts in the initial stage of the fuel starvation period, and the OER prevailing for the Pt/TiO2 catalyst over the whole starvation time. The complex interplay between different catalyst degradation processes during fuel starvation is discussed.