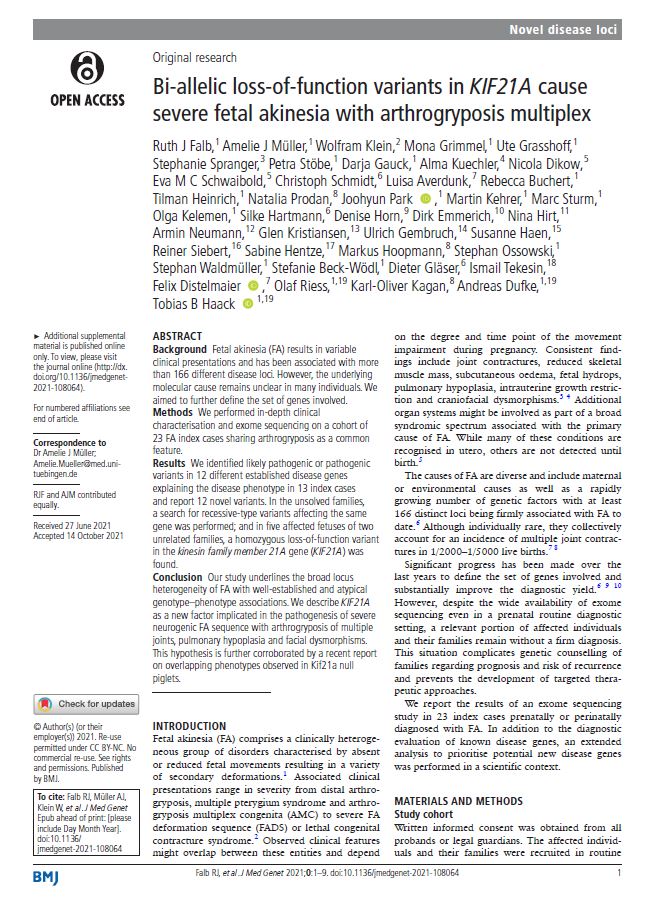 BackgroundFetal akinesia (FA) results in variable clinical presentations and has been associated with more than 166 different disease loci. However, the underlying molecular cause remains unclear in many individuals. We aimed to further define the set of genes involved.MethodsWe performed in-depth clinical characterisation and exome sequencing on a cohort of 23 FA index cases sharing arthrogryposis as a common feature.ResultsWe identified likely pathogenic or pathogenic variants in 12 different established disease genes explaining the disease phenotype in 13 index cases and report 12 novel variants. In the unsolved families, a search for recessive-type variants affecting the same gene was performed; and in five affected fetuses of two unrelated families, a homozygous loss-of-function variant in the kinesin family member 21A gene (KIF21A) was found.ConclusionOur study underlines the broad locus heterogeneity of FA with well-established and atypical genotype–phenotype associations. We describe KIF21A as a new factor implicated in the pathogenesis of severe neurogenic FA sequence with arthrogryposis of multiple joints, pulmonary hypoplasia and facial dysmorphisms. This hypothesis is further corroborated by a recent report on overlapping phenotypes observed in Kif21a null piglets.