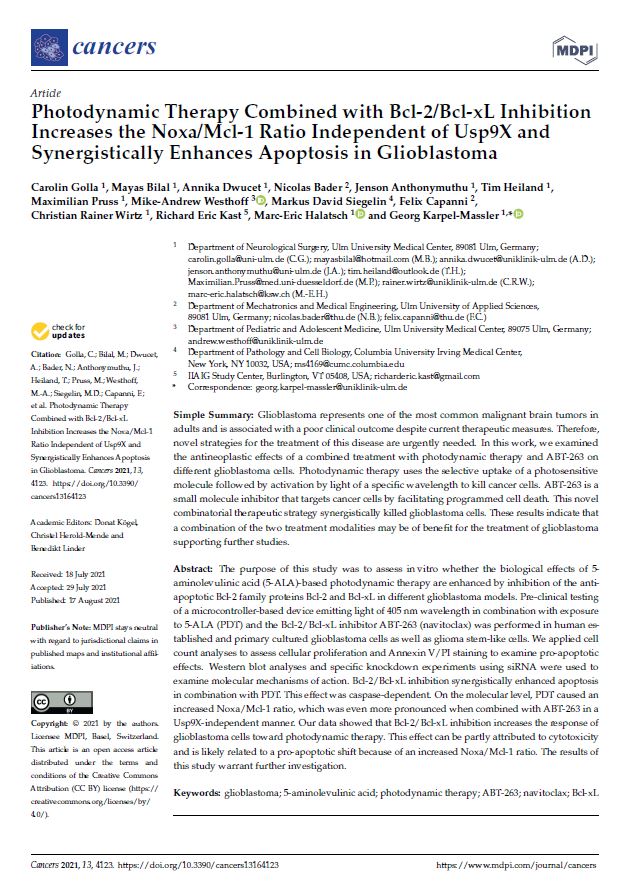 The purpose of this study was to assess in vitro whether the biological effects of 5-aminolevulinic acid (5-ALA)-based photodynamic therapy are enhanced by inhibition of the anti-apoptotic Bcl-2 family proteins Bcl-2 and Bcl-xL in different glioblastoma models. Pre-clinical testing of a microcontroller-based device emitting light of 405 nm wavelength in combination with exposure to 5-ALA (PDT) and the Bcl-2/Bcl-xL inhibitor ABT-263 (navitoclax) was performed in human established and primary cultured glioblastoma cells as well as glioma stem-like cells. We applied cell count analyses to assess cellular proliferation and Annexin V/PI staining to examine pro-apoptotic effects. Western blot analyses and specific knockdown experiments using siRNA were used to examine molecular mechanisms of action. Bcl-2/Bcl-xL inhibition synergistically enhanced apoptosis in combination with PDT. This effect was caspase-dependent. On the molecular level, PDT caused an increased Noxa/Mcl-1 ratio, which was even more pronounced when combined with ABT-263 in a Usp9X-independent manner. Our data showed that Bcl-2/Bcl-xL inhibition increases the response of glioblastoma cells toward photodynamic therapy. This effect can be partly attributed to cytotoxicity and is likely related to a pro-apoptotic shift because of an increased Noxa/Mcl-1 ratio. The results of this study warrant further investigation.